Everything about the golf swing eventually comes down to one question.  Did my golf ball go where I wanted it to?  Let’s talk about how much affect lie angle has on the direction of your golf ball.

What is Golf Club Lie Angle?

You have heard over and over again how important it is to have your clubs fitted to your swing.  But you are probably thinking “How much difference can it really make?”.  The answer could be a significant amount depending on how far out of line your clubs are with your swing.

Now that we understand what the lie angle is, let’s talk about the effects of having clubs with the wrong lie angle.

The first thing to know is that lie angle being incorrect is the most important on clubs with more loft.  The more loft a club has, the more magnified an incorrect lie angle will be when it comes to the direction of your golf ball.  A 3 iron will be much less offline than a PW with the same lie angle.

Let’s take a real world example based on an article written by Barton Creek Golf Academy .  The following scenario is for a right handed golfer.

“First, assume you have a 120 yard shot to a pin and your choice of club is a 46 degree pitching wedge. Let’s say you execute the shot perfectly with one exception: the toe of the club is up 4 degrees at impact. This means the lie angle of the club is adjusted too upright for you. This scenario creates a ball that will be pulled 4 degrees left of the target because angle of clubface is tilted 4 degrees in that direction. This creates a ball flight that is roughly 26 feet left of the pin.

If the pin you were playing for was 15 feet right of the greenside bunker, then you just made a technically sound swing and ended up in the bunker. Another example would be a 190 yard shot with a 20 degree 3 iron that was executed well except the toe of the club is 4 degrees upright at impact. This would cause the face angle to point 1.5 degrees left of the target at impact resulting in a shot that is 15 feet off-line.”

Based on the numbers above, each degree of lie angle will cause you to be 6.5 feet off target when hitting a 120 yard shot with a 46 degree PW.  When you consider that you almost never execute a perfect swing, 1 degree off could easily cause you to be in the bunker instead of on the green.  If you hit the ball 10 feet left of the pin, your lie angle would cause you to be an extra 6.5 feet left.  There are many bunkers that are less then 16.5 feet from the pin.

But Could It Also Help Your Game?

When you take this into consideration, it really depends on your swing faults as to how much an incorrect lie angle would help or hurt.  If you tend to pull the ball a good bit of the time, it is possible that a flat lie angle could actually help you hit it closer to the hole.  Just as a person who pushes the ball would be helped by an upright lie angle.

Many of the newer adjustable drivers are built to adjust lie angle to account for your swing faults.  If you look at the Titleist chart below you will see that the setting to help you hit a fade is .75* flat.  Since the majority of amateur golfers hit a fade, Titleist allows more adjustment to help you hit a draw at 1.5 degrees upright. 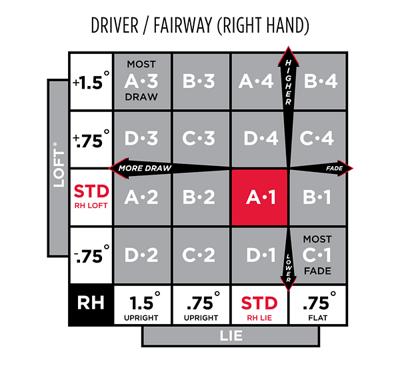 Obviously, the optimal thing to do is get lessons and get a better golf swing.  However, if you don’t have the time to perfect your golf swing.  You might try adjusting your lie angle to help cover your swing faults.

When Should I Have My Clubs Checked?

If you are buying brand new clubs, you can have them ordered to fit your swing with the correct length and lie angle.  If you buy a new set of standard clubs, you can have them bent to your specifications by a local golf shop.  However, keep in mind that most cast made clubs can only be bent a certain amount without causing stress on the metal.  If you own soft forged clubs, they are easier to bend and have more room for adjustment without causing problems.

I had a friend who once bought a used set of soft forged irons.  When he had the lie angles checked, they were all over the place.  If you like to go into the local golf shop and buy a used set off the rack like my friend, try to have the shop check and if needed adjust the lie angles for free.  They normally charge $3 to $5 per club to make adjustments, so this could save you some cash if you can get them to throw it in.   Check out our article about the best used clubs of 2017 if you are in the market.

When you consider what was discussed earlier in this article, it stands to reason that making swing adjustments could necessitate lie angle adjustments as well.  Let’s say your swing coach has you stand closer to the ball, there is a good chance you will need to have your clubs adjusted to be more upright.  Many swing changes will affect the lie angle you need, so make sure you have your clubs checked when you change your swing.

After a Lot Use

If you play a significant amount of golf, it is possible that your clubs have slowly bent over time.  Softer forged irons are more prone to bending, but it is possible with any set of clubs.  It would be a good idea to have your clubs checked every couple of years depending on how much you use them.  If you are a range rat who spends a lot of time wearing out the face of your favorite 7 iron, you may also be changing the lie angle of that favorite club.

There are many things to consider about lie angle, but in the end everything comes down to golf ball direction.  As discussed earlier, the best solution to a swing flaw is to fix your swing through lessons and repetition.  However, many people just want to go enjoy a round of golf every now and then without a lot of practice.  If this is you, you may want to adjust your clubs to help cover up a swing flaw.  While not ideal, it could help you enjoy the game more.

Golf Club Brokers has been selling on eBay since 2006 with a 99.9% feedback rating. We are a Platinum Power Seller and a Top Rated seller.

We have provided additional evidence of our identity to PayPal by passing key security checks and completing the PayPal Verification process. Verification increases the overall security of the PayPal network because most buyers prefer to do business with Verified sellers.