We received a counterfeit Titleist Vokey Spin Milled 2009 wedge and thought it would be a good idea to show everyone how to spot the fakes. There are a few differences that are easily noticeable when compared to the real thing.

Take a look at the pictures to get a better idea of how to spot the fake and make sure you don’t end up with one.

Note:  This wedge was purchased in the used section at a reputable golf shop, so don’t assume that just because it was a trade-in at a big name retailer that it is authentic.

If you have some used clubs laying around taking up space, go to our TRADE IN PAGE and quickly get cash for your used clubs.

Golf Club Brokers has been selling on eBay since 2006 with a 99.9% feedback rating. We are a Platinum Power Seller and a Top Rated seller. 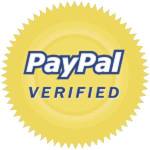 We have provided additional evidence of our identity to PayPal by passing key security checks and completing the PayPal Verification process. Verification increases the overall security of the PayPal network because most buyers prefer to do business with Verified sellers.